At the Knowledge Exchange 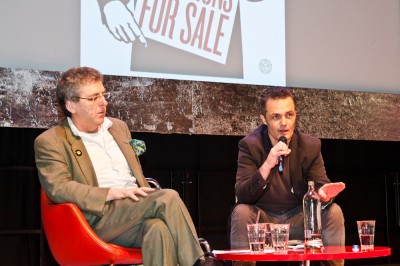 Here I am transacting/exchanging some knowledge with the good people of Rotterdam at the 2013 Film Festival (IFFR). George McKay and myself were invited to share some thoughts on the music documentary ‘Let Fury Have the Hour’ that had just been screened at the Scopitone cafe. The ‘Re/Soundings: Documenting Music and Memory’ programme was a HERA-funded partnership between the IFFR and the collaborative European research project POPID. The programme was organised as part of Popular Music Heritage, Cultural Memory and Cultural Identity conference which took place at the Erasmus Research Centre for Media, Communication and Culture, 30 Jan-1 Feb 2013.

The idea for the Re/Soundings knowledge exchange initiative was developed by myself and Sara Cohen and I drafted the successful HERA grant application which was costed as €40,000. However, for reasons probably best not gone into here, that remained the extent of our contribution to this initiative, bar this brief and last minute burst of KE activity (George and I both gave the film something of a pasting, by the way). It would be nice to be able to say that Sara and I could lay claim, or at least in part, to the official credit for this grant, or some of its monies, but alas that was not to be. Such is the nature of the collaborative research process I guess.