Architecture
and Culture / Transgression: body and space
Call
for Papers

To
transgress is to break, violate, infringe, or go beyond the bounds of accepted
norms or limits; such limits may be behavioural or cultural (embedded
in law, moral principle, taboo or other codified standards) or spatial.

We
would like to invite you to submit work for consideration for publication
in a special issue of the AHRA journal, Architecture and Culture on
the theme of “Transgression: body and space”. This issue will draw from
the 10th AHRA International conference on the subject of Transgression which
took place at the University of the West of England, Bristol UK, 21-23 November
2014. However, submissions are also very welcome from contributors who
did not attend the conference. This journal will be guest edited by David
Littlefield and Rachel Sara, who will work closely with the permanent editorial
team of Igea Troiani, Suzanne Ewing and Diana Periton.

This
special issue will explore the way in which the notion of transgression
allows us to explore the relationship between the body and space.
From Edgar Allen Poe to Georges Bataille, the history of transgression
is intimately bound up with ideas of the body, psychology, identity
and society. If, as Lefebvre argues, space is a social production, then
what role might transgression play? How can understandings of the body (what
it is; its relationship with mind, psyche and identity; the manner in which
it can enhanced, changed and adapted) affect our understanding and interpretation
of space? How can the relationship between the body and space be
(re)considered?

Papers
should be submitted electronically via Editorial Manager at: http://www.editorialmanager.com/archcult/
by the 27th January 2014. Notes for
contributors can also be found on this site. Contributors will be informed
of the result of the peer review process by Friday 7 March.

Papers, accepted
subject to revisions, must be completed by Monday 24 March. If
you have any queries or require further information, please contact: David
Littlefield: david.littlefield@uwe.ac.uk Rachel
Sara: Rachel.sara@uwe.ac.uk

Architecture
and Culture is the new journal of the Architectural Humanities Research
Association.

Planum,
the Italian online urban planning magazine, is publishing a series of
links to urbanism-related films
, with interesting examples. Most of the
clips are historical, but there are also recent films, that are not freely
visible online, but which seem quite interesting, as“unfinished
Italy”, in which among other things you can see a re-use of an unfinished
road viaduct.


The Place of ‘place’ in wellbeing

The
place of ‘place’ in wellbeing scholarship

Proposals
for the panel *The Place of ‘Place’ in Wellbeing Scholarship *to be held at the
ASA’s meeting in June. Paper proposals should be submitted at

This
panel presents a forum for the critical engagement with conventional and
contrasting approaches and understandings of wellbeing. Our panel aims to: 1)
contribute to the emerging scholarship that calls for more complex and
culturally nuanced considerations of “the everyday business of living in
the world” (Whatmore 1999:30); 2) takes indigenous complex understandings
of the world and how to live in it seriously; 3) responds to recent calls for
“place-based” understandings of wellbeing; and 4) shows the
methodological contributions of rigorous ethnography to wellbeing scholarship.

Session sponsored by:
Geographies
of Leisure and Tourism Research Group (GLTRG) of the RGS-IBG

According to Park (1994,245), ‘one of the more
prominent geographical dimensions of religious expression is the notion of
sacred space’. Interest in this concept within human geography has
increased considerably in recent years (for instance, Hopkins et al, 2013;
Dwyer et al, 2013; Sturm, 2013; Megoran, 2013; Przybyiska, 2013; Dewsbury and
Cloke, 2009; Daniels, 2009; Holloway and Valins, 2002). Linked to the
idea of sacred space is the phenomenon of pilgrimage, which has been studied
through ‘a wide range of approaches – academic, confessional, personal and
canonical’ (Coleman and Elsner, 1995, 8), and which has also attracted the
attention of geographers (for example, Maddrell and della Dora, 2013).

Today, sacred space and pilgrimage are features of
all faiths and spiritualities, as well as being evident within the secular
realm, and are therefore important concepts to be considered in relation to
geographical understandings of places and their contexts. In addition, sacred
sites and pilgrimage routes may be re-imagined as tourism opportunities, both
by promoters and by tourists themselves. Indeed, Ron (2009,290) asserts that
pilgrimage is simply ‘a sub-type, or form, of tourism’, while Tidball (2004)
fears that it may very often show the same characteristics of ‘transience,
spectatorship, non-engagement with the local culture and moral
irresponsibility’ as tourism often does.

This session aims to investigate the co-production
of sacred space through the lens of pilgrimage/theology/spirituality/belief
systems, on the one hand, and that of tourism/leisure/promotion/visitor
behaviour, on the other, addressing practices at a range of scales –
individual, communal and commercial. Papers are invited which address
this issue of co-production specifically, as well as those that deal more
broadly with the concepts of sacred space and pilgrimage.

Abstracts of approximately 200 words should be
submitted to Jan Mosedale (jan.mosedale@htwchur.ch) by Friday, 14th February 2014. 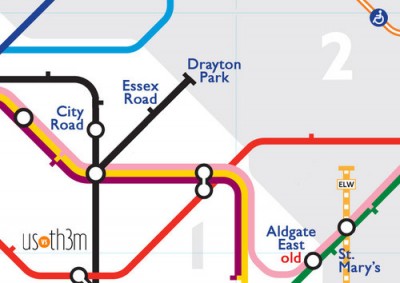 Dylan Maryk has
made a Google Map of London Underground’s abandoned or relocated stations; usvsth3m has
turned this into a map based on the standard Underground map.

Call for Papers for Volume 3, Issue no. 1 of the journal, Architecture and
Culture is titled ‘Architecture Film’
Issue edited by Dr Igea Troiani and Professor Hugh Campbell.

This aim of this issue of Architecture and Culture is to investigate how
the now expanded field of architecture utilises film studies, filmmaking
(feature film, short film, animation, stop motion animation or documentary)
or video/moving image making in practice, teaching or research, and what the consequences are of this interdisciplinary exchange.

While architecture and film have clearly distinct disciplinary outputs, the
possible intersection between them is less defined even though there is
considerable extant literature and research on this topic. Through this
call, we seek papers that investigate the ways in which practicing
architects, teachers of architecture and their students, and architectural
researchers, filmmakers, animators, documentary makers, social scientists or social geographers, anthropologists, landscape architects, urban designers,interior architects and installation artists are using film uniquely in their practice. We call for explorations of the way in which film contributes to architectural and filmic practice, knowledge and design,seeing the two disciplines side by side as equal, with no prepositions suggesting a specific relationship but at the same time creating a kind of distance and difference between the two.

We invite rigorously speculative, purposively imaginative, visually and
verbally stimulating contributions that explore architecture and film
through their own mode of argument – that combine text with sound or image
(moving or still), or that use text or image in investigative ways. We
encourage contributors to upload film, video or sound files relating to the
submission, as they will be accessible via the online publication of the
journal. Contributors are encouraged to submit parts of a script,
storyboard, mood board or sequential video grabs from the film or video
referred to in the paper. A maximum of 10 jpg images and 1 video per
submission will be accepted through our on-line submission system. We want
to explore how new digital technologies might impact on the form and content of an academic journal article.

– Designing in Practice and Film

Only a small number of practicing architects have made short or feature
fiction films. Most practicing architects use animation or 3D visualisations ‘for demonstration or selling’ their work, or are approached by or commission documentary makers or filmmakers to make documentaries or films of their architecture. Some architects adopt a less pragmatic approach,instead electing to use film or video to focus on existential space. Select social scientists or geographers have used video to record social relations in space. While it does exist, it is less common for architects to use live action footage as a part of their fieldwork studies or design research process. What are new and original ways in which practicing designers of
space can use film in their praxis? What expertise do architects need to
know about filmmaking to undertake inter-disciplinary architecture film
work? Can, and then how can, the making of videos or films better allow
architects to understand the cultural, social and environmental context of
sites to enable to them operate in a more engaging way with client/user
issues? What are the virtues that film and video can bring to
architectural/landscape/urban design/interior design? How can CG, VFX and
animation be used inventively to contribute to the practice of
architectural/landscape/urban/interior design? How can working with film or
video contemporise the architect’s practice?

Within schools of architecture, it is increasingly common to see the use of
experimental filmmaking or integration of film studies in the architectural
design studio or for site research. Within the architectural design studio,
teachers of architecture have speculated on how architecture and film might
be used methodologically to change the process of design or to incorporate
particular design requirements. Using animation to create animated
architecture is becoming more commonplace. Students are capable of making
and editing films easily and can therefore produce short films, videos and
animations quickly. What are new and original ways of using film in design
studio teaching? How might we better understand place, culture and identity
through using film in architectural studio research? Are there truly radical ways in which film can be used in teaching about the making of space and place?

In their analyses of commercial and art house films, theoreticians and
historians regularly speculate on the ways in which film studies inform an
understanding of architecture and space. An uncommon form in which film is
used in architectural history research is the documentary, where oral
accounts can better be recorded. Another emergent form of architectural
filmmaking is in the production of short fiction films. How can making
documentaries or films enhance architectural research? To what extent can
researchers on architecture learn filmmaking? How have architects
collaborated with film industry experts in research? What is the difference
between working with real footage as opposed to fictional material in making architecture films?

The submission deadline is 10th March 2014, 5pm UK time. Accepted articles
will be published in March 2015.

For author instructions, please go to ‘Notes for Contributors’
http://www.bloomsbury.com/uk/journal/architecture-and-culture/

If
you have any queries or require further information, please contact: Igea
Troiani: itroiani@brookes.ac.uk

Architecture
and Culture is the new journal of the Architectural HumanitiesResearch
Association http://www.ahra-architecture.org/