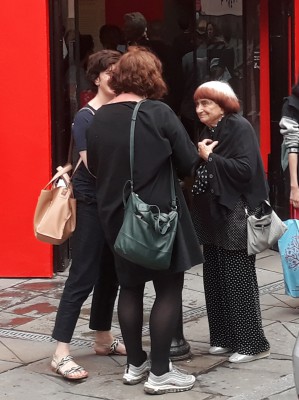 Very sad indeed to hear the news of Agnes Varda’s passing. A truly inspirational figure and up there with the greats. I first became acquainted with her films when working on my PhD in the early 2000s and have been smitten ever since. The Gleaners and I remains one of my favourite films of any director. It never ceases to enchant and inspire. Other stand out films for me include Vagabond, Cleo from 5 to 7, Daguerreotypes, The Beaches of Agnes, and the recent Faces/Places. But for me all of her work stands up to repeated viewings. I was very fortunate to see her in conversation at FACT in Liverpool last year as part of the 2018 Liverpool Biennial. The photograph above was taken afterwards outside FACT. I will miss her playfulness, creativity and indefatigable energy.